I am NOT a victim of ‘white privilege’: Suella Braverman attacks diversity industry and says modern training methods are ‘brainwashing’ civil servants

By Martin Beckford Policy Editor For The Daily Mail

Suella Braverman has attacked the diversity industry for painting her as a victim of white privilege because of her background.

The Attorney General said the ‘patronising’ training given to civil servants would assume she must be oppressed because she is an ethnic Asian woman with working-class roots.

She described the courses as ‘brainwashing’ and said that taxpayers’ money should instead be spent on making sure passports and driving licences are issued quickly.

Her comments came after the Daily Mail revealed that Mrs Braverman, the Government’s chief legal adviser, has scrapped diversity and inclusion training in her department having discovered that hundreds of her lawyers spent 1,900 hours on the woke lectures last year.

Speaking to Talk TV yesterday, she said: ‘I looked at the training materials and I was very sad at what very intelligent, fair-minded, professional people were being taught.

She said that rather than uniting people, it divides them by cohorts ‘based on different kinds of grievances’.

Asked if Liz Truss – whom Mrs Braverman is backing to be the next Tory leader and prime minister – would ban diversity training across Whitehall, she replied: ‘Liz has been very forthright on this and she said she wants to really bring an end to this waste of money.’

Mrs Braverman added: ‘It’s politically motivated, it’s based on a contested ideology and frankly it’s brainwashing our civil servants.’ She said Britain is the ‘best place in the world’ to be a minority. 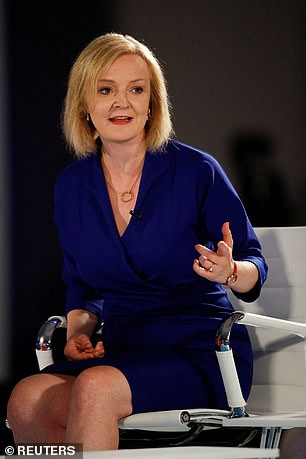 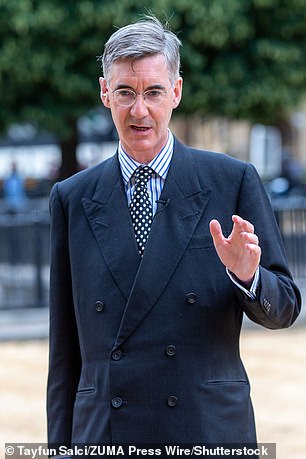 ‘Liz [Truss] (left) has been very forthright on this and she said she wants to really bring an end to this waste of money,’ Mrs Braverman said. Cabinet Office minister Jacob Rees-Mogg (right) also hit out at the ‘woke rubbish’ being taught to officials this week

Non-affiliated peer Baroness Fox agreed with her, saying that although equality, diversity and inclusion sounds like a good thing, ‘it’s become a watchword for a particular, very prescriptive, narrow political agenda’.

‘If you don’t go along with it, that’s when you can get yourself labelled transphobic or racist,’ she said.

Mrs Braverman used an article in yesterday’s Mail to launch a fightback against the woke ‘witch trials’ gripping Britain.

She branded the diversity industry a ‘new religion’ in which zealots seek to punish unbelievers while others are too scared to speak out about what is happening.

Cabinet Office minister Jacob Rees-Mogg also hit out at the ‘woke rubbish’ being taught to officials this week, telling LBC radio he had discovered one course called Check Yo Privilege, while another ‘offered to tell people about witchcraft’.

It has emerged that a training video on the Department for Levelling Up’s website tells civil servants to acknowledge they ‘are part of a society, norm, culture or a system that is racist’.