A despairing Scottish family is being kicked out of Australia after 10 years in a heartbreaking visa row despite doing nothing wrong.

Electrical expert Mark Green, 44, was headhunted for his specialist solar installation skills in 2012 and flown to Australia with his wife Kelly, 45, and daughter Rebecca, 19.

He moved to his new home with the promise of their permanent residency being sponsored by the company flying him in.

But every time he’s been eligible, the employers have folded before the paperwork could be completed – and it’s now happened seven times to the devastated family.

They will now be thrown out of the country next week, unless the government intervenes to save them.

‘I don’t want to go home. I don’t. I really don’t…’ mother-of-two Kelly sobbed in their  empty Adelaide home after they sold off everything ahead of the family’s forced exit.

Relocating to the UK is set to cost $60,000 – and will force them to leave behind beloved pet dog Maisie because of the prohibitive $35,000 cost of flights and quarantine fees.

The Greens have already spent more than $150,000 on immigration lawyers and visa and residency applications but must leave the country before they can apply again.

‘We sold it all to come out here and then we started again,’ Mr Green told Daily Mail Australia.

‘And now we’re having to sell it all, to go back to Scotland, to try and apply to come back again, to restart again. For the third time.

‘I’m nearly 50. We can’t go through this anymore. There’s nothing for us back in Scotland now.’

The family have been on a sponsored work visa since arriving which has meant they need to pay for everything Australians take for granted, on top of paying their taxes.

They were denied access to Medicare or free public state schooling for daughter Rebecca, which costs them $8,000 a year – but they say they paid without complaint.

Electrical expert Mark Green, 44, was headhunted for his specialist solar installation skills in 2012 and flown out to Australia with his wife Kelly, 45, and daughter Rebecca, 19

‘It was the best day of our lives coming here. The best day ever,’ said Kelly, 45, originally from Kilbirnie, 40km south-west of Glasgow.

They want to stay in Australia permanently but currently just need their bridging visa changed from an E-type to a C-type to allow them to apply to stay without leaving.

The family has been undone by firms sponsoring Mark as an employee and starting a three year route to residency, but going bust before the process is complete.

‘The company went into liquidation and which means I have to start again, all three years, all over again,’ said Mr Green, originally from Prestwick, Ayrshire.

‘That’s happened seven times to me. Most of them closed because of warranty issues – they don’t want to guarantee the warranty of the product.

‘It ends up costing them money, so what they do is they shut up shop and they open up under another business name.’ 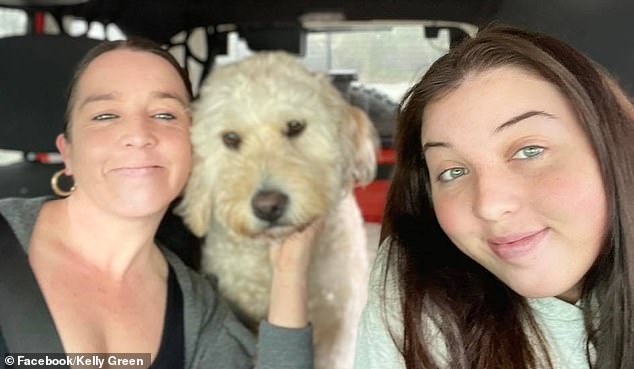 Relocating to the UK is set to cost the family $60,000 – and will force them to leave their beloved pet dog Maisie (pictured with mum Kelly, left, and daughter Rebecca) behind because of prohibitive $35,000 flights and quarantine fees

The final straw came after one employer told him he’d applied for the Greens’ residency and paid their fees – but hadn’t, causing them to unwittingly overstay their working visa.

‘I was let down by my former employer,’ he said. ‘I trusted him and he lied to me.

‘The government has a responsibility to protect me as a foreign worker who was invited to come to Australia to work and was let down by an Australian company.’

Their son Jamie has already flown home to Scotland after the visa conditions meant he was unable to work in Australia for years.

The family has been fighting to stay in the country for a year but time is now running out and they’ve had to sell up ahead of next week’s deportation.

Mr Green won’t even be able to work in his industry when he arrives back in Scotland as his UK electrical qualifications are now out of date after a decade in Australia. 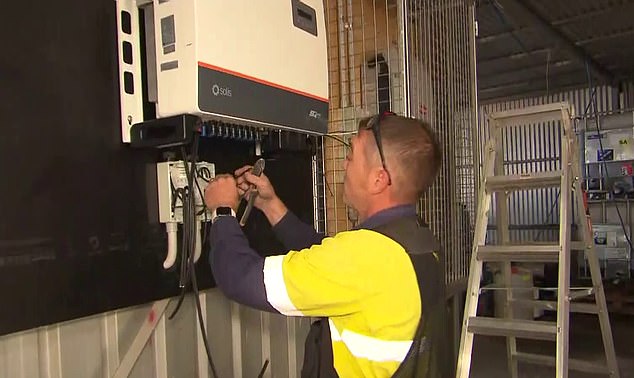 The final straw came after one employer told Mark Green he’d applied for their residency and paid their fees – but hadn’t, causing them to unwittingly overstay their working visa

He has nothing in Scotland and nowhere to live, with his elderly parents unable to cope with the family joining them while they wait for their visa to be approved.

‘Everything I hoped for here is gone,’ said Mr Green.

‘The stress is terrible. Absolutely terrible. It’s not fair. Not fair at all.

‘Nobody has been in contact with me about trying to sort this out. All they say to me is I have to leave the country.

‘My mum and dad are nearly 80 – as much as they would love to see us, they don’t want a family staying with them. It could take up to two years.

‘I thought I’d have my own company and my own home by now but instead our life is in turmoil.’

Their case has now been taken up by Adelaide politician Frank Pangallo, who compared them to the Tamilese Murugappan family from Bilgoela in Queensland, who had their visa conditions changed to let them stay despite arriving by boat.

‘They didn’t do it legally, unlike the Greens, and they got preferential treatment,’ Mr Pangallo, of South Australia’s Best Party told Daily Mail Australia.

‘Forcing a family to leave a country they’ve called home for 10 years simply to return to their country of origin to re-apply to return to Oz seems pointless and ridiculous.

‘And this is all happening while governments grapple with changes to the country’s skilled migration program due to massive shortages across the country.’

Mr Pangallo added: ‘If you want skilled migrants to come into this country, you better give them an undertaking they’ll be able to stay here and not be booted out when it suits you.

A spokesman for Mr Giles insisted the immigration minister never commented on individual cases, despite commenting extensively on the Biloela case.

She then told Daily Mail Australia: ‘The minister does not comment on the individual circumstances regarding the Green family.’